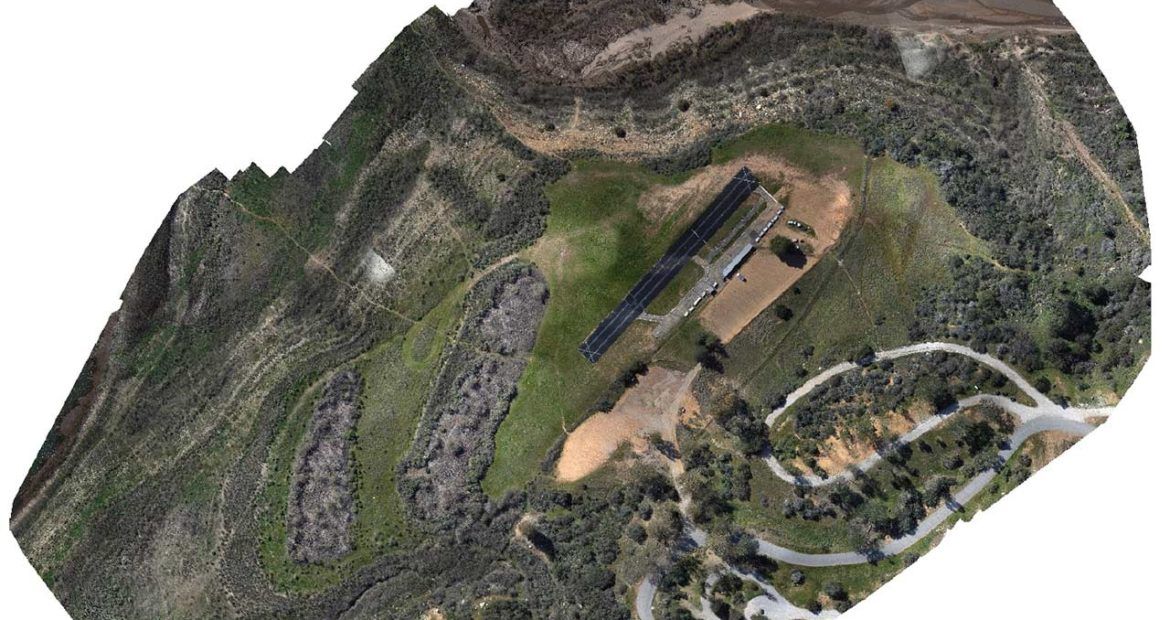 The Delair UX11 PPK is a survey-grade mapping drone which meets the demands of high-accuracy mapping applications such as mine, construction, and land surveying. It is extremely easy to use and, as demonstrated in a site with 24 checkpoints and no GCPs, it can produce map products with an absolute accuracy better than 3 cm (0.1 ft). 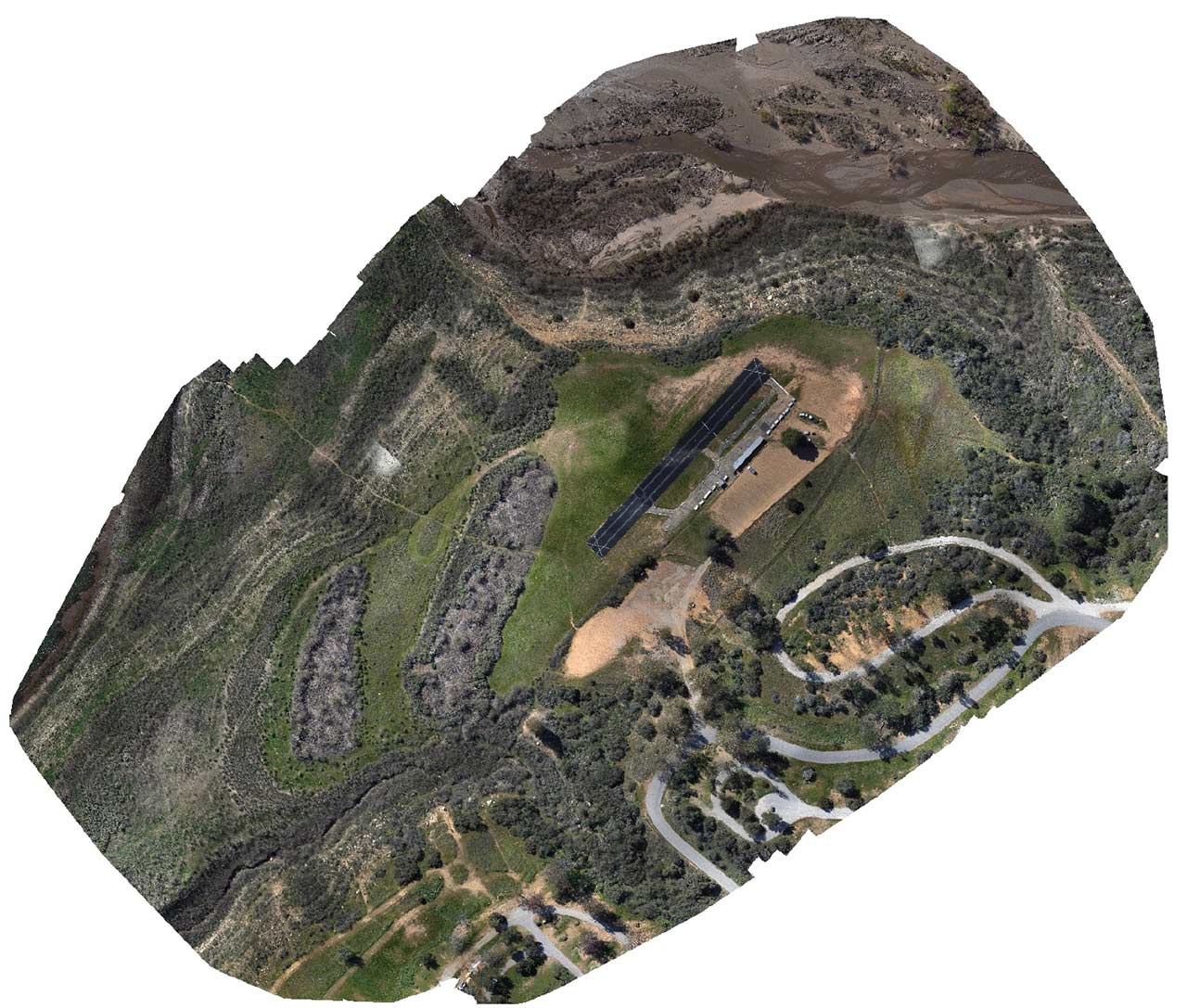 Images from the Delair UX11 PPK mapping drone are ultimately processed in photogrammetry software in order to create 2D maps (such as an orthomosaic photo, digital surface model, or contour map) and 3D models (such as a point cloud or 3D mesh surface model).  The relative and absolute accuracy of maps and models created from the UX11 can vary in accuracy depending on many factors including environmental conditions, surface cover type, size of area, field and GNSS survey methods, and photogrammetry software used (along with the corresponding processing settings and techniques).

This article evaluates the results from a Delair UX11 PPK flight over an area near Lake Casitas in California. The surveyed area (see orthomosaic image from survey below) has moderate relief and a mixed surface cover including bare earth, buildings, vegetation, and roads. The findings demonstrate the level of accuracy possible for a surveyor to achieve without the use of GCPs in real-world conditions.

While 24 checkpoints were measured to evaluate accuracy, no ground control points (GCPs) were used in the photogrammetric adjustment. The average RMS error for absolute accuracy of the point cloud reconstructed from the drone images was an impressive 12 mm (0.04 ft) horizontally and 51 mm (0.17 ft) vertically. 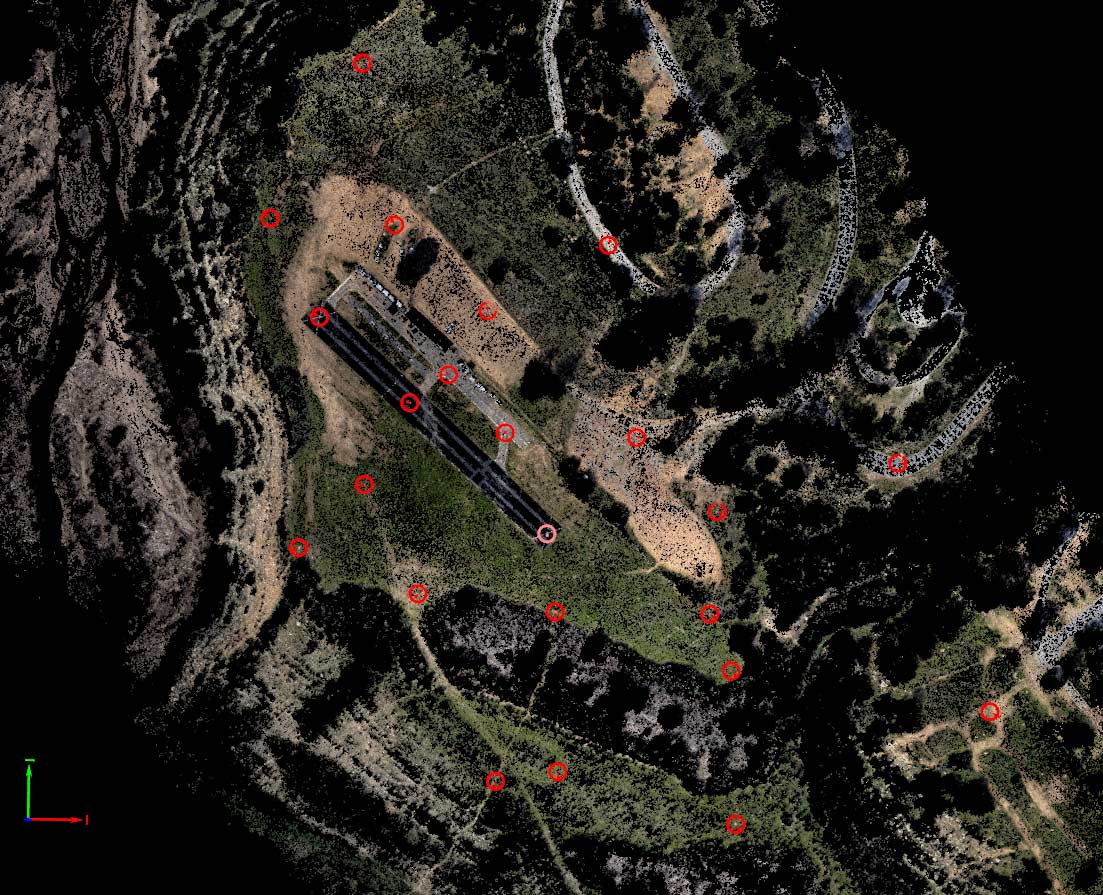 A total of 24 targets or features visible from the air were used as checkpoints. These were found on a variety of surface types including asphalt, bare dirt, and low-lying vegetation.

A Trimble R8-3 GNSS receiver was setup within the area of interest and was used as the base station for the post-processed kinematic (PPK) process of the UX11 aerial survey and the real-time kinematic (RTK) process for measuring the checkpoints. Both PPK and RTK are commonly used methods to extract survey-grade results. The checkpoints were measured using a Trimble R10 GNSS receiver using RTK. The average estimated absolute accuracy of the checkpoints was 6 mm (0.02 ft).

The UX11 flight was planned in just a few minutes in the field using Delair Flight Deck, a user-friendly Android application. A single flight was completed to cover the target area.

The UX11 flight dataset was PPK-processed in Delair After Flight software. The images and GNSS data from the drone were imported into the software, along with RINEX files from the Trimble base station and the corresponding base antenna height and reference position in global latitude/longitude (WGS84) coordinates and ellipsoidal height. Delair After Flight also corrects the high-accuracy image coordinates for the lever-arm offset (distance between GNSS antenna and camera sensor) and records the final image center coordinates in the metadata (EXIF) of each image as geotags with an average GNSS accuracy of around 1 cm (0.03 ft).

Once the images were geotagged with high-precision coordinates, they were then processed in Pix4Dmapper, a commonly used photogrammetry software for drone mapping. Following the first step of the Pix4D workflow, referred to as initial processing, the accuracy of the dataset was ready to be measured and evaluated.

How to evaluate drone map accuracy 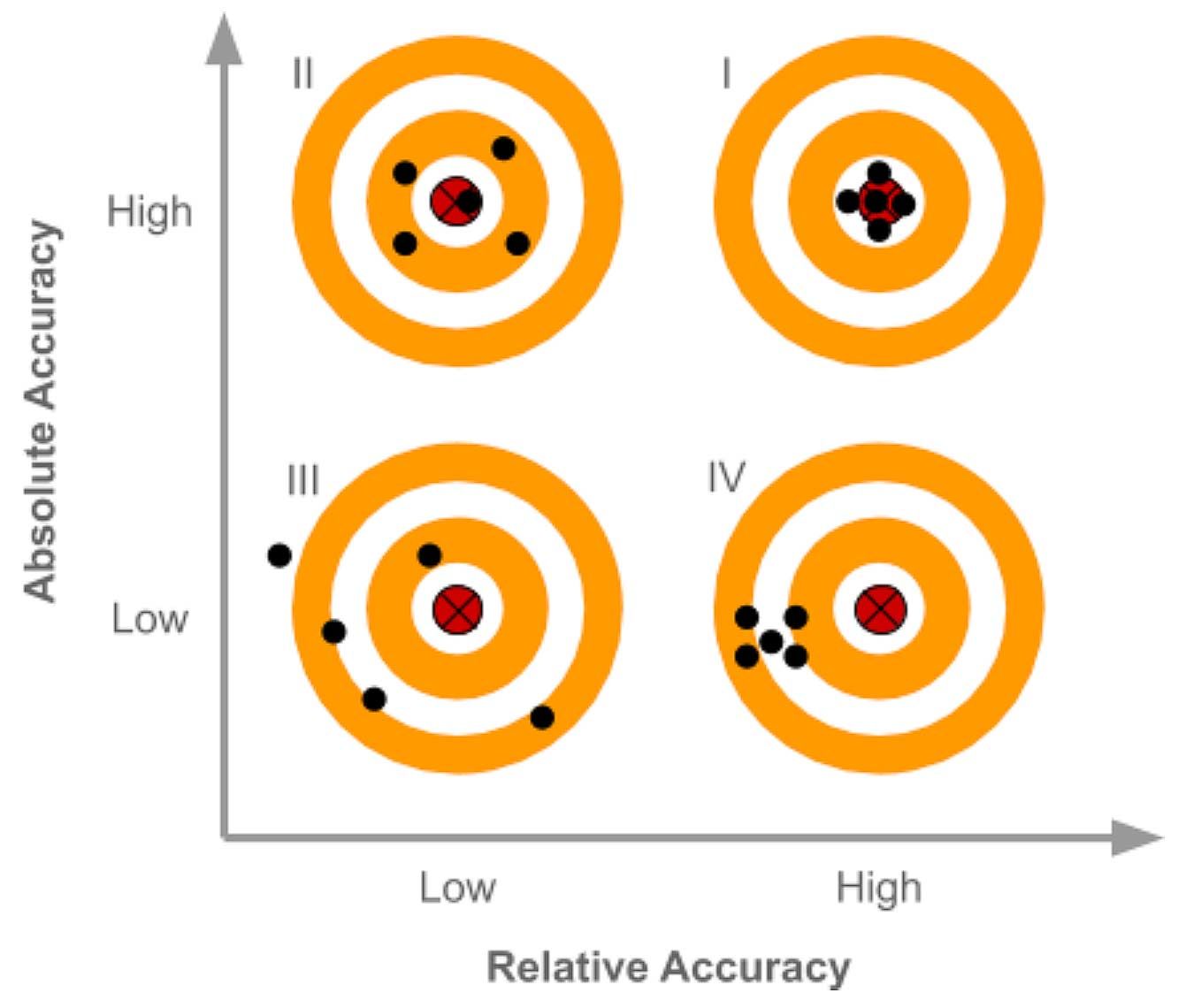 Without checkpoints, the absolute accuracy of a map is either unknown or assumed based on previous experience. The only way to be certain of a map’s accuracy is to compare the checkpoints’ observed coordinates to independently measured coordinates (considered authoritative) of the same points, as shown in the following graphic. 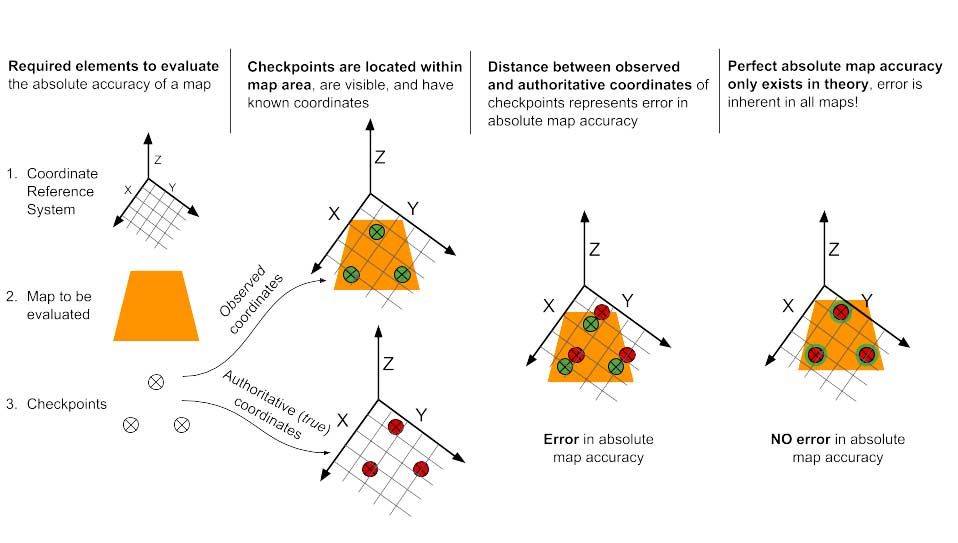 Absolute accuracy is typically what matters most in high-precision geospatial applications such as land surveying, where it is important to not only know if the measurement between two objects within the map products is correct, but also if the dataset is precisely in the correct place in the world, in reference to a coordinate reference system.

The term survey-grade accuracy may have different meanings to different people. It generally implies an absolute accuracy of around 10 cm (0.3 ft) or below, depending on the specific application. However, an absolute accuracy of 3 cm (0.1 ft) is commonly the goal of land surveyors as it will suit the vast majority of surveying applications. This level of accuracy is feasible by an operator with the right expertise, who follows best practices, and uses high-quality survey equipment. Accomplishing this with a drone is a challenge, but as demonstrated on this project, it can be done with the Delair UX11 PPK.

Measuring and interpreting the UX11 data accuracy in Pix4Dmapper

Following the initial processing step in Pix4Dmapper, a file containing the GNSS-measured coordinates of the checkpoints was imported. A series of visual observations were made by a human operator in Pix4D by clicking on the center of each checkpoint target or feature in each individual drone image where it appeared (see below).

After marking all the checkpoints, the project was reoptimized. It is important to note that these checkpoints (a.k.a verification points in Pix4D) were not used as GCPs in order to adjust or optimize the dataset. During this reoptimization, Pix4D simply calculated the distance between the GNSS-measured (authoritative) position of the checkpoint and the computed (observed) position in the three directions X, Y, and Z. Finally, a new quality report was generated by PIx4D to display the results. The checkpoint error table from the report is displayed below. 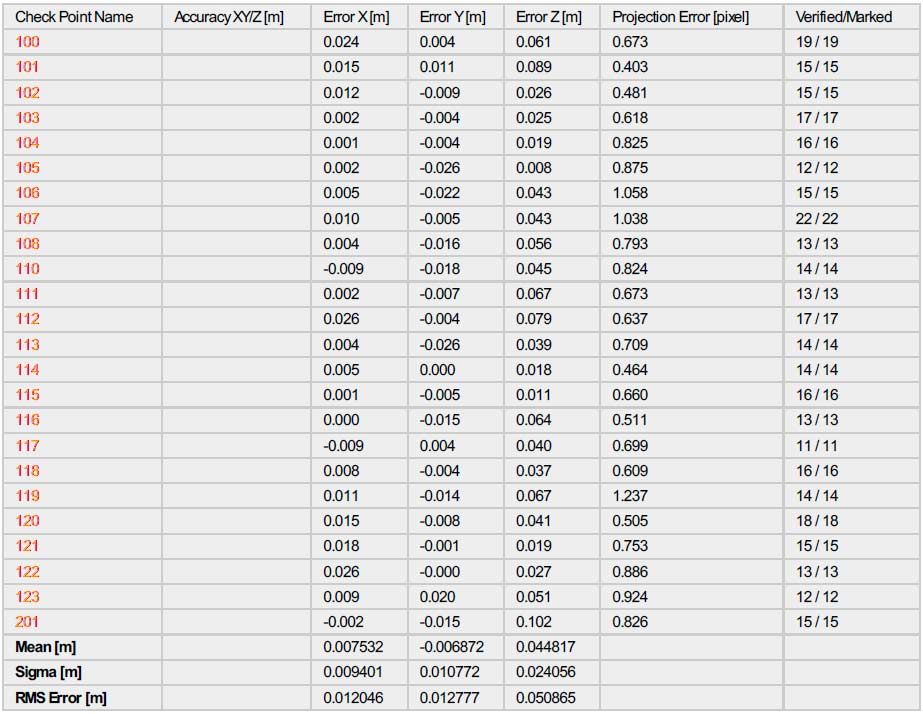 Based on the RMS error, the Delair UX11 PPK produced maps of the Lake Casitas site with an overall absolute accuracy of 12 mm (0.04 ft) horizontally and 51 mm (0.17 ft) vertically. Considering the high density of checkpoints which themselves averaged an estimated absolute accuracy of 6 mm (0.02 ft), this level of precision and accuracy is nothing short of impressive for an aerial survey by a drone – making the Delair UX11 PPK drone a reliable tool for survey-grade mapping.