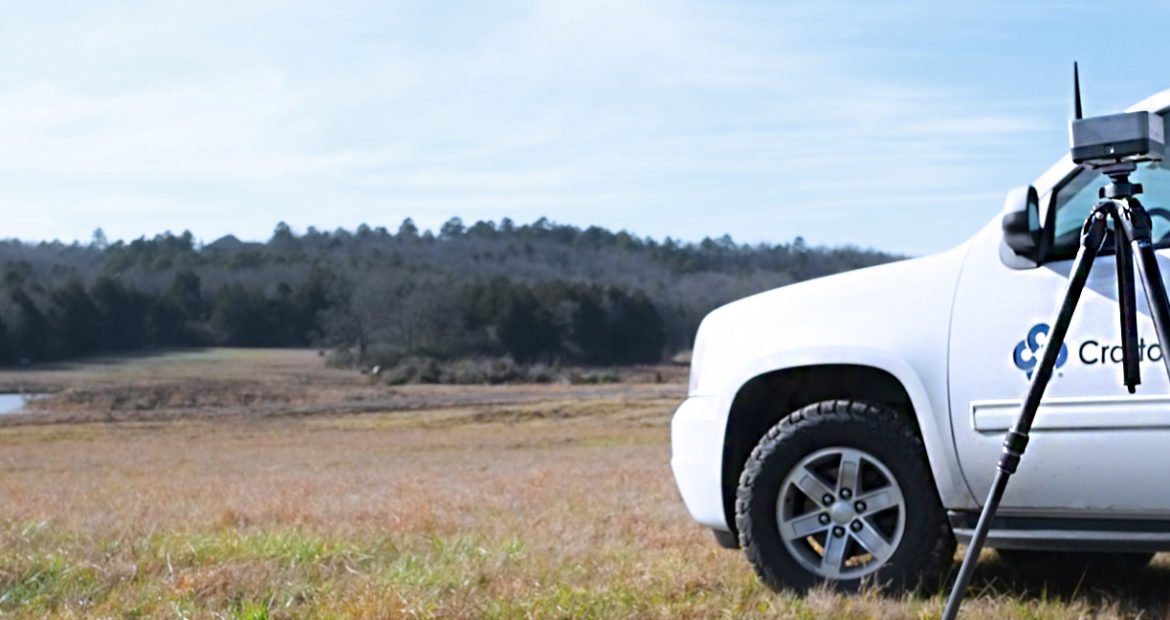 How Crafton Tull completed a 9,000 acres pipeline drone survey project in less than 45 days with a fixed-wing UAV

How Crafton Tull completed a 9,000 acres pipeline drone survey project in less than 45 days with a fixed-wing UAV

Facing a tight deadline, Crafton Tull turned to Delair’s UX11 drone to survey a 52-mile, 9,000-acre corridor for a new oil and gas pipeline—saving time, money, and producing a detailed survey that met its client’s requirements.

Crafton Tull, a leading and award-winning diverse engineering and survey firm based in Conway, Arkansas, turned to fixed-wing drones to achieve better results at a lower cost in a short timetable.

Crafton Tull chose a long-range fixed wing UAV to perform the large scale survey, allowing them to immediately get to work and control the quality of their results: the Delair UX11.

The UAV’s end-to-end system, combined with its operational performance benefits, significantly lowers the total cost of ownership compared to other surveying and mapping options.

“The UX11 is a very capable and efficient platform, especially in large scale planning work”

The project was split into three segments and the Crafton Tull team spent three days doing recognition of the terrain. They then positioned GCPs and conducted about 65 flights in less than 25 days of field work. They reduced the amount of GCPs placed by approximately 75%, thanks to the PPK-enabled GNSS and Delair After Flight post-processing powerful software.

Within 10 days, Crafton Tull was able to process the photogrammetry data of the route, develop necessary CAD files and deliver detailed alignment sheets (essentially blueprints for the pipeline detailing its route, surroundings, and obstacles) in PDF format to the client.

The UX11’s ability to perform long-range flights and its overall endurance is a major factor in improving productivity, reducing field time and lowering costs for us, which we can then pass along to our customers. It’s a very user-friendly and mobile system, so our time from truck to flight is much faster.

Planning an oil and gas pipeline presents a series of challenges. Long before construction can begin, the full length of the pipeline’s intended route must be surveyed in detail—a long ribbon of land traversing private property, county or state lines, buildings, roads, fences, and other obstacles. This due diligence is needed for a variety of purposes, including the initial step of getting necessary permits to begin construction. For a project of this scale, on-the-ground surveying would be a time consuming process. Aerial mapping and surveying are far more efficient. But manned aircraft solutions, such as helicopters or airplanes, are costly, can be highly disruptive to people on the ground, require specialized resources, and aren’t always able to capture the detail needed by surveyors. In addition, manned missions can often involve extended timeframes and complex resource planning, making them challenging for quick turnaround projects.

Crafton Tull was contracted to survey and plan for a proposed pipeline near Houston, Texas. The corridor for the pipeline was 52 miles long and roughly a quarter-mile wide, totaling about 9,000 acres of land area across three counties.

In addition to surveying topography, Crafton Tull needed to map any permanent structures, environmental issues, roads, fences, power lines, and other pipelines it might cross. The biggest challenge, however, was the deadline for the project: 45 days.

“The UX 11 is a complete solution that meets the requirements of Crafton Tull very well. Features like an embedded global shutter camera, intuitive analytics and data reporting tools, and postprocessed kinematic (PPK) capabilities for high-quality results make it well suited for the accuracy and detail they need.”

The solution: a fixed-wing drone

Crafton Tull went for a long-range fixed-wing UAV to perform the large-scale survey.

Crafton Tull ruled out manned aircraft for the survey, citing factors such as the tight deadline, lower image quality, weather limitations, complicated planning and deployment, and reliance on a third party to give Crafton Tull the accuracy they required.

Instead, Crafton Tull turned to an in-house drone solution, allowing them to immediately get to work and control the quality of their results. Crafton Tull had already been successfully deploying Delair drones for about three years. Now, Crafton Tull sought a drone with greater endurance and the latest surveying technology.

Crafton Tull consulted longtime partner Navigation Electronics, Inc (NEI) for an optimal drone solution. NEI offers complete buying, renting, leasing, and servicing solutions for mapping, GIS, surveying, construction, and other technologies, and is an authorized distribution partner for Delair in the southeastern United States. Crafton Tull’s strong relationship with NEI goes back more than ten years, and according to Tucker, NEI has “always been on the forefront of selling and providing the latest technology.”

“NEI is second to none,” said Tucker. “From helping us decide to purchase the unit, to taking the delivery, to getting the training scheduled—everything was seamless and incredibly fast.”

NEI’s proposed solution for Crafton Tull’s survey was Delair’s newest drone, the Delair UX11. Introduced in late 2017, the Delair UX 11 is a state-of-the-art hardware-software platform that provides highly accurate images for survey-grade mapping, with onboard processing capabilities and real-time, long range control. The platform’s enhanced centimeter level precision along with its efficient operational characteristics make it the most cost-effective solution for large area surveying and mapping. It delivers integrated features for before, during and after flight operations, and can be controlled by either 2.4 GHz wireless or 3G/4G cellular connectivity.

The UAV’s end-to-end system, combined with its operational performance benefits (allowing flights of up to 59 minutes covering over 350 acres at 400 feet with 60% overlap), significantly lowering the total cost of ownership compared to other surveying and mapping options. On top of its portability and ease of use, one of the major advantages of the UX11 is its birdlike takeoff and landing (BTOL) ability. The UX11 can be hand-launched and performs a deep stall for a soft landing, which eliminates the need for a launch platform, significantly reducing the size of the landing zone, and increasing the longevity of the aircraft by removing the long landing skid typically associated with fixed wing aircrafts.

From a logistical standpoint, the BTOL capability made takeoff and landing locations far less cumbersome, and the actual flight time from the UX11 was almost double of what it was for a standard fixed wing

Executing a project of this scale requires a good bit of advanced planning, and the Crafton Tull team spent about a week putting together a deployment plan. They broke the project into three segments and spent about three days orienting themselves to the project site.

Once deployment began, a three-man team spent about 24 working days in the field gathering the necessary data. Mornings would be spent setting ground control points (GCPs) and afternoons were for flying. Due to U.S. regulations restricting the range of UAV flights to the operator’s line of sight, the UX11 captured approximately one mile of corridor per flight. Crafton Tull conducted an average of four flights per day, flying at roughly the same time each day for consistent imagery and data.
The UX11’s PPK capability was an essential part of the project. By leveraging the onboard PPK-enabled GNSSand the powerful post-processing software, Delair After Flight, Crafton Tull was able to reduce the amount of GCPs placed by approximately 75%. Generally, they placed one target in each corner and two targets in the middle (one as a control and one as a check) of each planned rectangular flight. Since each flight would be processed separately in photogrammetry software, the adjacent flights would overlap in order for the two GCPs on each end to be used in the processing of each flight to mitigate the warping effect that can occur on surface models of long corridor projects. Based upon the level of confidence in the PPK results, Crafton Tull was able to confidently meet the expected accuracy requirements by using the minimally placed GCPs and independent check shots collected by their field survey crews, which would not have been possible without the onboardPPK capabilities of the UX11.
In total, Crafton Tull conducted about 65 flights and spent fewer than 25 days in the field, including time to set up ground control points and perform other activities associated with the project. While weather, line of sight requirements, and access to certain areas presented challenges, Crafton Tull was thrilled with how the Delair UX11 performed in the field.

Turning the vast amounts of data collected by the flights into a deliverable product ended up being one of the more difficult aspects of the program. The team would regularly overnight hard drives back to the home office from the field with a day or two’s worth of data.

“Due to the time constraints and the speed of deployment, processing the data was a challenge for us,” Tucker said. “The amount of data that we were collecting was in the neighborhood of 100gigabytes a day.”

Tucker used up to 8 computers at once to process the data in a timely fashion. Within ten days after concluding field operations, Crafton Tull was able to process all of the photogrammetry data of the route, develop necessary CAD files and deliver detailed alignment sheets (essentially blueprints for the pipeline detailing its route, surroundings, and obstacles) in PDF format to the client. The client was highly satisfied with the results despite the tight deadline for the project.

Ultimately, Crafton Tull was happy with the UX11’s performance, noting that it proved to be well-suited to the unique demands of a topographical survey.

“We pushed the limits of our capabilities and put the UX11 through the wringer to figure out what it could do. Overall, we are really pleased—the thing is a workhorse. Now we really know what the true capabilities of this unit are.”

I would absolutely rate the project as a success