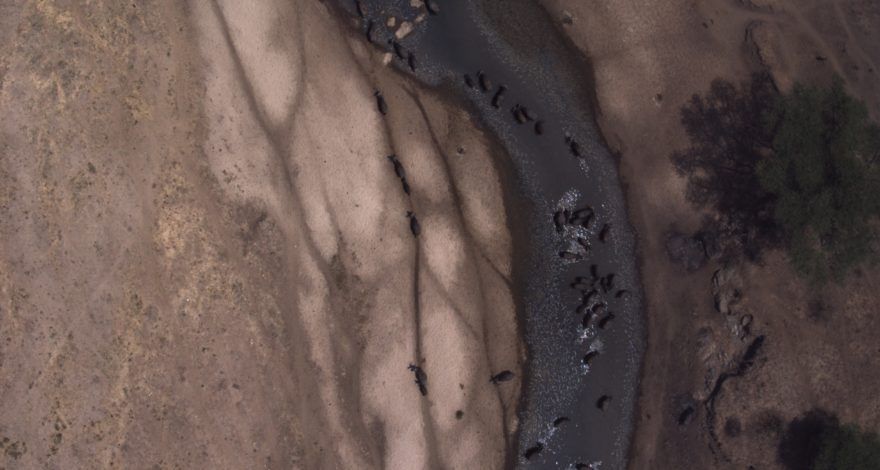 Bathawk Recon is an antipoaching UAV service company in Tanzania. They propose their services to Tanzanian Governmental and Non-Governmental Organizations to help them improve the management of the country’s wildlife resources.

According to the International Union for Conservation of Nature, 30,000 elephants are slaughtered every year, mainly to feed the world’s illegal ivory market, causing Tanzania’s elephant population to decrease considerably.

Bathawk Recon aimed to propose leading-edge surveillance technology for antipoaching operations. They intended to use professional UAVs to reveal the places where poachers are hiding, for example by detecting their camp fires at night. In addition, they aimed to monitor the herds of animals, detect any abnormal behavior and possibly even count them. They needed a discreet, high-performance UAV to cover large areas per flight.

In the Selous Game Reserve, the DT26X was used, with a giro-stabilized EO/IR video surveillance turret. This equipment allows to cover larger areas. The robustness of the DT26X enables it to accomplish operations in harsh conditions, bearing in mind that the Selous Game reserve has a high percentage of forest cover and very rough terrain. The turret is equipped with a 2-axis gimbaled controller, up to 10x optical zoom and real night vision. Thanks to the a 20km-range motorized antenna, the video was transmitted in real time to the operator.

The DT26X performed 4 long-distance flights in strong winds and temperatures of up to 40°C. Transportation was challenging and the portability of the UAV was a key advantage. The DT26X was flown over the dense forest covering a large area per flight. It also flew over the camp from where the flight was being operated, giving the specialist a clear idea of how human activity can be detected.

No data analysis was made since the video transmission was in real time.

The EO and IR video recordings were delivered to the client. Animal detection tests demonstrated that animals can be detected from an altitude of 450m. Auditory tests proved that at 450m the UAV is imperceptible.

A herd of buffalo of about 200 animals was seen. Each animal was easily distinguished. The wildlife specialist could tell with the direction, speed and composition of the herd, that they were out of danger at that moment.

WHY DID THEY CHOOSE DELAIR?

Do you want more information?

CONTACT US!
Please add widgets to your sidebar in Appearance / Widgets menu.