Here are the most frequently asked questions about the Delair UX11… and their reply.

How much area can you cover with a UX11?

The area that can be covered in a single flight with a UX11 depends on several factors including: shape of the area of interest, wind speed, wind direction, orientation of flight lines, side overlap setting, flight height, and potentially other environmental factors. For example, at a flight height of 122m (400 ft) with 60% side overlap one can cover approximately 1.2km2 (300 ac).

What camera and GNSS sensors are on board ?

The camera in the UX11 was developed by Delair in order to optimize a camera for mapping projects in a lightweight drone. The software, image processing, and exact hardware components are considered proprietary by Delair. The camera includes a high-end industrial-grade sensor with a true global shutter (not rolling or mechanical), a high-quality lens, and interfaces with electronic components and software entirely developed by Delair.

The GNSS receiver is a high-quality, high-precision sensor from Septentrio.  It is the Septentrio AsteRx-m2 UAS board configured for dual-frequency (L1/L2) and dual-constellation (GPS and GLONASS) support.

What is the software for mission planning and control?

The software used for UX11 mission planning and flight operations is Delair Flight Deck.  It is an intuitive Android application that enables a user to quickly plan a mission and deploy a UX11.  This professional drone mapping application allows a surveyor to easily plan and execute complex mapping projects by creating or importing a flight area of interest, setting flight and camera parameters such as overlap and GSD (altitude), viewing photos taken by the UX11 on-board camera in real-time as they are being taken during flight, adjusting camera settings during flight with either automatic or manual settings, and seeing data quality indicators throughout the flight.

Delair Flight Deck is also packed with safety features including: horizontal and vertical geofences to restrict the drone to certain flight areas, warnings during mission planning to alert the pilot of potential hazards of a planned flight such as terrain heights, a semi-automated pre-flight checklist that ensures the aircraft is functioning properly before takeoff and that the pilot has mitigated any potential mechanical or flight planning error, and in-flight alarms that warn the pilot of potential problems or trigger automated flight maneuvers to avoid hazards.  During a flight, Delair Flight Deck provides all the necessary tools to monitor the performance of the drone and to command and control the drone by executing automated and evasive flight maneuvers or commanding the drone to return to land.

Delair Flight Deck also facilitates firmware updates for the UX11 and Delair Link module and is available for free on the Google Play Store.

What is Delair After Flight?

Delair After Flight is a Windows software application that enables a UX11 user to retrieve, organize, quality check, filter, postprocess, and prepare their data for photogrammetry.  Following a drone mapping mission, many drones have cumbersome data management workflows that involve SD cards, manually creating and copying data to multiple locations, sometimes expensive or clunky GNSS PPK processing software, and an overall human error-prone process that must be passed through before the data is prepared for photogrammetry processing.  Delair After Flight mitigates all of that by providing a streamlined data flow from the field to the office so that a user knows their data is photogrammetry-worthy before they get to the photogrammetry step so that they don’t waste time or resources.

Once a UX11 mission is complete, all the data is stored on the SSD of the drone.  The UX11 can then be connected to a PC in the field or in the office via USB cable, and is then imported directly into Delair After Flight.  From here, data can be organized, photos can be reviewed for quality assurance, GNSS data is processed (PPK), photo selection filters are applied, and the selected photogrammetry-ready photos are exported.  In addition to generating the geotagged JPG or TIFF photos, additional files are created to ease the photogrammetry project setup including JXL files for use in Trimble Business Center Aerial Photogrammetry Module, PRJ files for Trimble/Inpho UASMaster project setup, and CSV files with photo metadata that can be used in a wide range of professional softwares.

In the context of drone mapping, both PPK and RTK are methods for calculating the error in the GNSS data and then correcting for that error so that the location data recorded for each photo center is as accurate as possible in terms of absolute accuracy (the real-world position based on a coordinate system).

Both methods take approximately the same amount of time as RTK requires the configuration and communication setup of additional equipment in the field while PPK requires less time in the field, but a few extra minutes in the office for post-processing GNSS data. 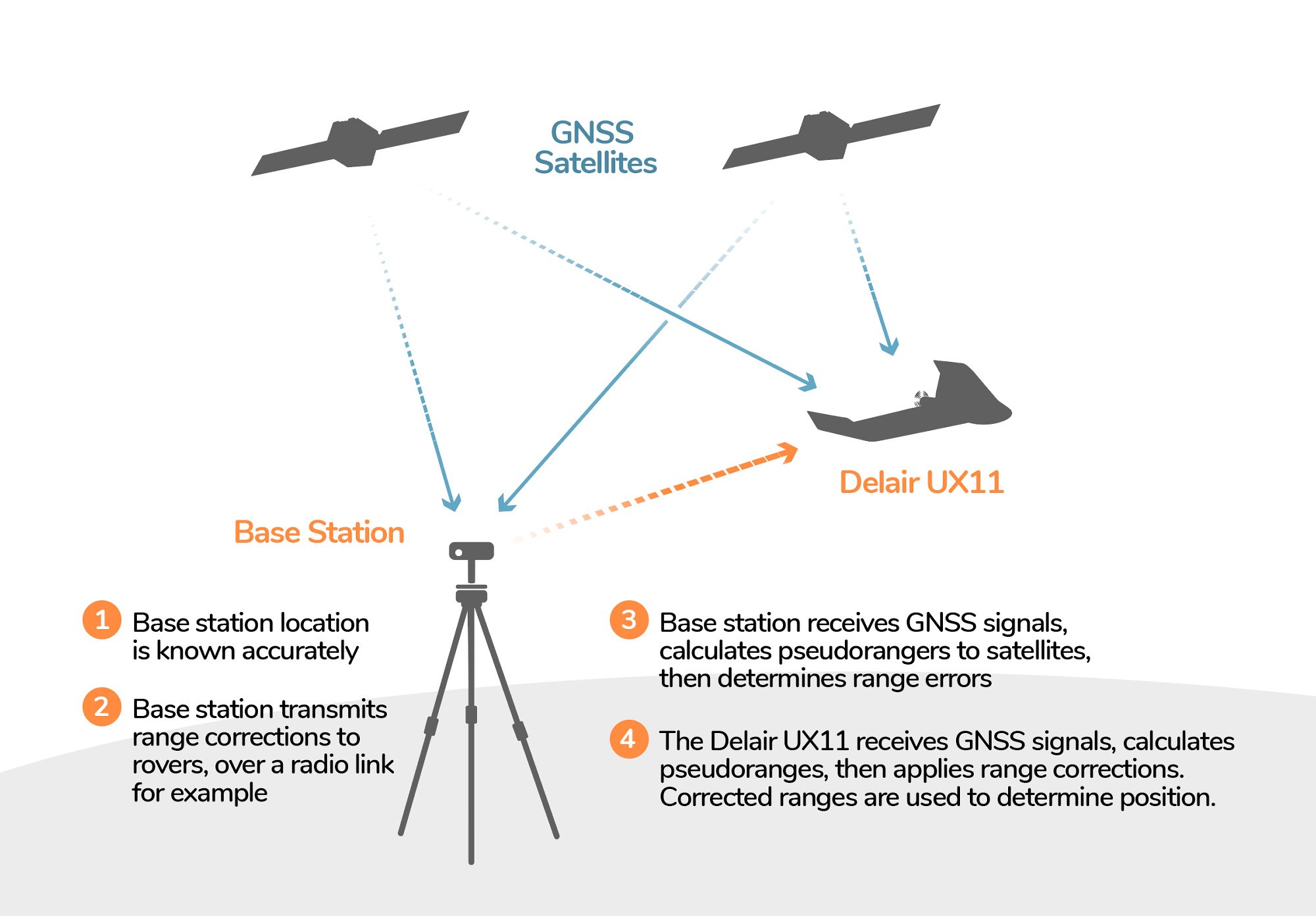 What are the advantages of PPK?

The advantage of PPK is that it can yield a more robust solution and more consistent results.  You do not risk the impact of some positions not being corrected due to loss of communication link in the field like you do with RTK, and you benefit from PPK algorithms that can do both forward and backward processing of positions instead of only backward processing as with RTK. 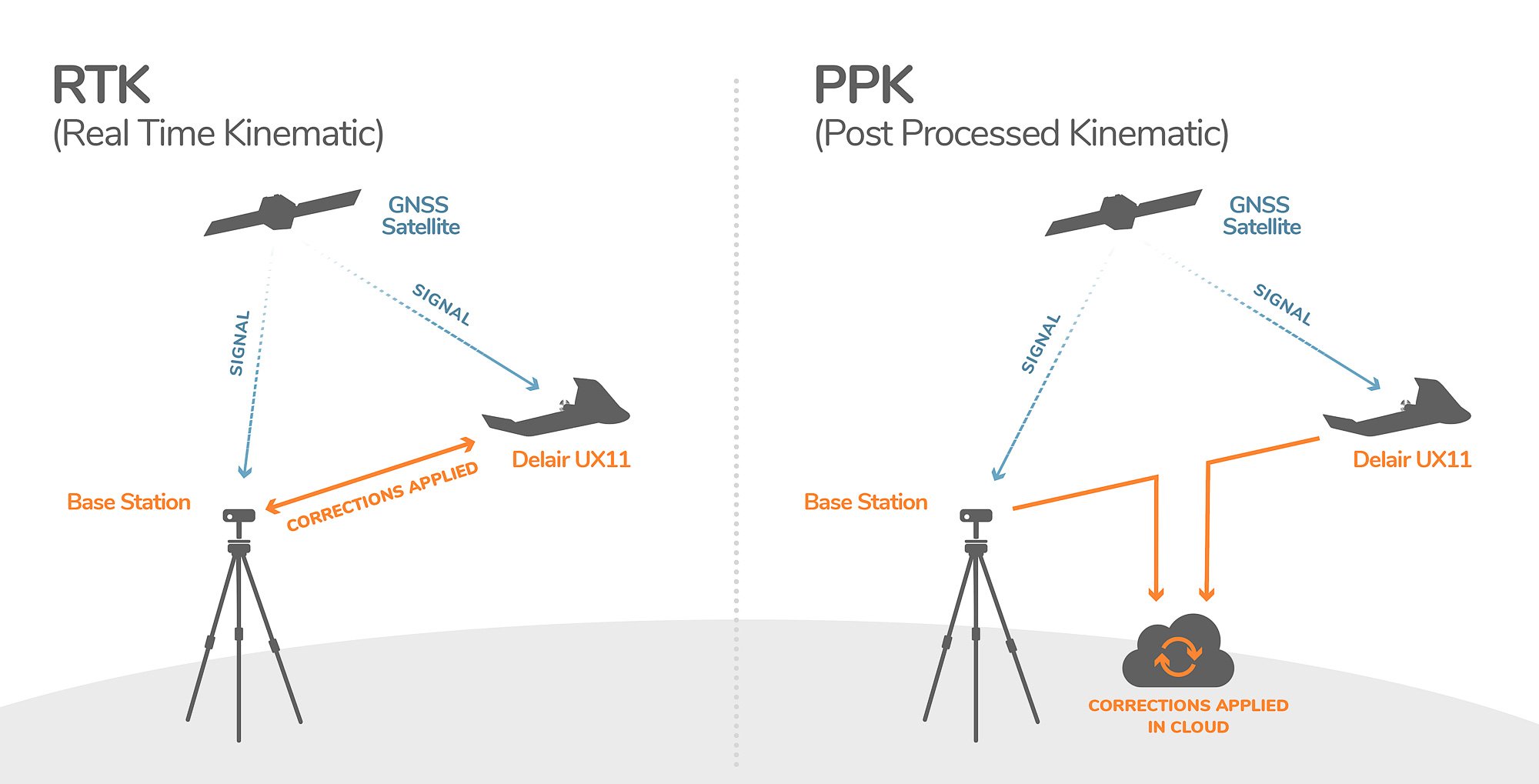 What kind of accuracy can I expect?

Some general rules of thumb apply with the UX11.  The UX11 has a high-precision L1/L2, GPS and GLONASS GNSS board.  When PPK corrections are applied, the absolute accuracy of the GNSS positions can be down to approximately 1+ cm horizontal and 1.5+ cm vertical.  Delair After Flightalso computes some additional error that may impact the absolute accuracy of the photo center positions to account for the lever-arm offset (the distance between the GNSS antenna and the camera sensor).  This usually adds up to a few centimeters of additional error. These camera position accuracy estimates are used by photogrammetry softwares like Pix4D or delair.ai in order for the photogrammetry algorithm to adjust the photos sufficiently to produce a more accurate overall dataset.

Finally, the final deliverables produced may vary in accuracy but horizontal accuracies below 6 cm (0.2 ft) and vertical accuracies below 9 cm (0.3 ft) are indeed achievable with a UX11 PPK.  Accuracy can be far better than that but can also be worse depending on factors such as those described above.

What happens if the cellular connection is lost in an area out of range of the radio link? Can it pursue its flight plan or would it proceed with emergency procedures?

If the cellular link is lost during a flight outside of the radio link range, the UX11 goes on flying according to the flight plan while trying to reconnect. If it does not reacquire a cellular network connection again, a safety procedure is triggered to bring the drone back home.

How big of an area do I need to land?

The UX11 can land in an area with a radius of approximately 5 m (16 ft). It is recommended that you select a larger area for your landing zone when possible to allow some space as a safety buffer. Testing has shown the UX11 is capable of consistently landing in confined areas.  Obstacles along the approach path must also be considered. There should be no obstacles taller than 45m (150 ft) for on the final approach path before the designated landing area. Please see the UX11 User Manual (section 4.2.3) for a full description of landing clearances and the recommended area for landing.

What are the benefits of a fixed-wing drone like the UX11 compared to a multi-rotor?

Two of the main benefits are (1) productivity and (2) a purpose-built, streamlined workflow.

The UX11 can cover a lot more area in less time with a single flight than a multirotor without compromising resolution or accuracy.

The software and work flow surrounding the UX11 is dedicated to professional mapping projects.  This optimized workflow provides data quality checks throughout each step as well as data management and data processing capabilities (like PPK) all within one streamlined workflow from the same vendor.  This reduces the amount of time it takes to get the data processing in photogrammetry software and it reduces the number of mistakes a user could potentially make.

Can I swap camera?

No, the Delair UX11 does not support swapping off-the-shelf cameras. Rather, the UX11 has a purpose-built payload that is fully embedded in the electronics stack of the drone.  This enables advanced functionality that is highly beneficial to mapping such as real-time control over the camera settings while in flight, real-time image quality checks,  and streamlined data management and transfer from the drone to the office.

What output data do I get?

The data that comes directly off of the UX11 is encrypted and nicely packaged so that it can go directly through Delair’s streamlined workflow with Delair After Flight.

There is a single folder of data stored on the SSD of the UX11 for each flight which includes the flight logs from the autopilot, the GNSS data, and the photos.  Once this folder of data is loaded in Delair After Flight, it can be PPK-processed, quality-checked, and exported into a format compatible with the photogrammetry software of your choice such as a geotagged JPG or TIFF.

What is the battery life?

The UX11 battery lasts up to 59 minutes on a single full charge.  This battery life can depend on the environmental conditions – heat, cold, age, wind, or weather can all impact the efficiency of a battery depending on the strain put on the battery in flight to adjust to current conditions.  It is also wise to plan a flight to be less than the maximum allowed time in order to have some power in reserve in the event you are required to make any diversions from the original flight plan. A good rule of thumb is to plan missions that last 50 minutes with takeoff and landing.

Can you provide some info about the safety feature? Such as what will happened in lost link, loss of GNSS etc. or circumstances when the parachute will automatically deploy.

In case of loss of communication, it gets back to the landing spot as pre-programmed. It can also include an optional tracker. The loss of GNSS is not a problem because the UX11 works with PPK technology instead of RTK, so all geolocation data can be match to the images after the flight without risking a loss of data. As you will see in the presentation, there is no parachute, the UAV include a ground distance sensor that allow a soft landing in a narrow area despite of a landing angle of 30 degrees.

Back to the Delair UX11 page