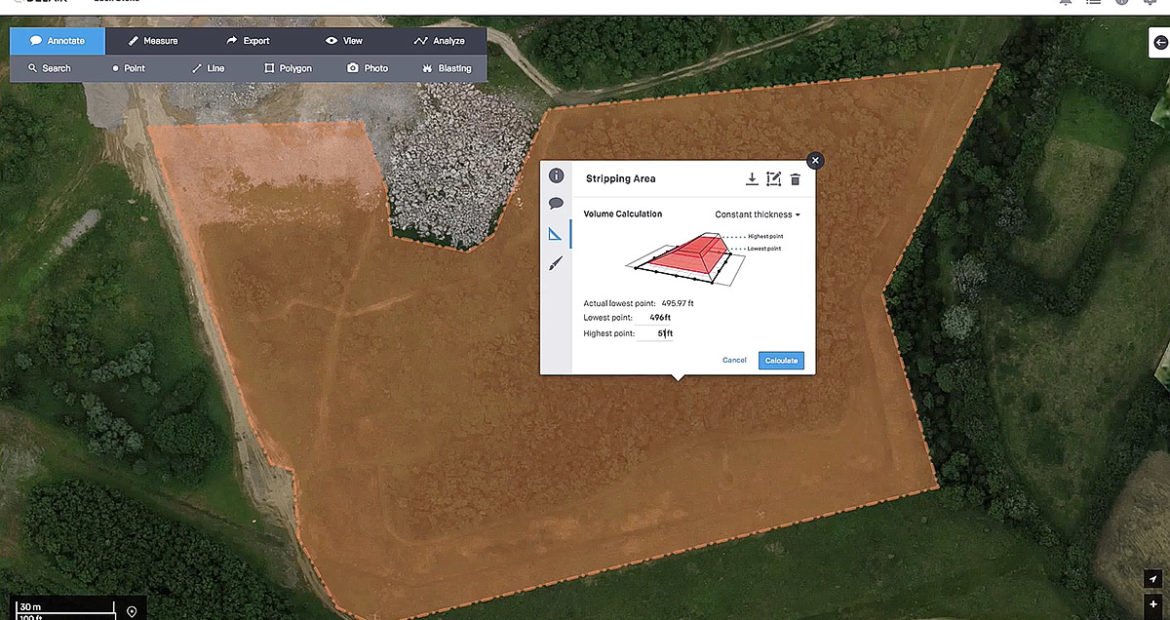 Luck Stone produces and supplies sustainable aggregates for civil engineering, private construction, and environmental projects. It offers over 75 crushed stone, sand and gravel products, sourced from the largest quarry network in Virginia. With locations in Maryland and Virginia, Luck Stone’s business is thriving and expanding fast.

The family-owned company is built on four core principles of commitment, creativity, integrity, and leadership. It has taken the lead on technological innovation in the aggregates industry. Luck Stone developed the first self-service stone loading system, and pioneered computer monitoring, crisis management systems, and sharing digital data with customers.
Investing and using drone technology was the next logical step. Since 2016, Luck Stone has been using UAVs to transform their operations and environmental footprint. Drone data has proven its financial value by increasing efficiency and uncovering untapped reserves of aggregates.

Luck Stone has to present detailed, accurate plans for their customers, including the quantity and value of resources available. With planes, manual surveys and days spent in data collection, it can be difficult to demonstrate the hidden value of the land beneath our feet (the dirt).
Prior to using UAVs, Luck Stone used planes to take photos and collect information about their sites twice a year. Then they had to make 3D models of their sites. According to John Blackmore, surveying supervisor at Luck Stone, “Prior to using drones, we had to charter planes to do aerial surveys (photos) twice a year. This was costly and time consuming. Then, we had to fax paper copies of the surveys over to our project managers in various locations and use overnight shipping to ensure that the project data can be shared with others.”

Drone to get more frequent aerial data than with traditional methods

Now, UAVs can be used to quickly, precisely and safely map areas that are difficult to access by foot, such as elevated terrain. This results in more precise data.

The ability to access and share job site data in near real-time is a valuable business and communications tool for providing progress reports to various departments. By sharing information with everyone involved in a specific project through the delair.ai cloud platform, issues related to quantities and costs can be addressed sooner.

All of our design is done in 3D. We have to think in 3D, and being able to visualize it with the Delair.ai platform is really helpful

Sand and gravel extraction projects are complex and often long-term. This is why the company wants to extract resources as efficiently as possible, while minimizing the environmental impact. That covers a range of requirements: from site security to extending the life of projects which add to the local economy.

In the beginning, Luck Stone saw drone technology just as a way to manage their inventory. The company uses drones to fly over pits and access high-altitude inventory with just one drone pilot. This eliminated the need to send workers up to high altitudes, or hire expensive airplanes for flyovers. With UAVs, site inspections and updates can be done as frequently as 4 times a year.

While the drones are designed to collect data for computer analysis, they offer a lot of flexibility. The drone operator can pause to take photos or videos of anything which stands out, and instantly share the information with engineers back at the office. Broader views of the territory around extraction pits has even helped project designers to place safety berms more effectively.

“We’ve been able to learn through our [Delair] partnership that there’s so much more value and other types of analysis as well.” – John Blackmore, surveying supervisor

In addition, Luck Stone never loses sight of its responsibility to its employees. As a pioneer of new technologies and processes, the company aims for the gold standard in worker safety. It also needs to provide expert engineers and surveyors with accurate, timely, and detailed data. With drones, there is a reduction in time and survey costs. Plus, Luck Stone’s project team is no longer put at risk traversing the quarries (or mines). There is a huge improvement in surveyor safety.

Luck Stone soon realized that the benefits of drone technology went far beyond safety inspections. In fact, one of the most significant benefits of using Delair’s aerial intelligence platform with mapping technology on their projects is improved site surveying efficiency. It now uses UAVs for inspections, surveys, mapping, and volumetrics of current and future projects. In addition to proving invaluable for survey work, drones enable project managers to keep a watchful eye on everyone involved with the project.

Data from the UAVs is instantly uploaded and shared, ready for analysis by engineers and project designers. Luck Stone can then make use of Delair’s Aerial Intelligence platform to manage, process, view, analyze and collaborate around aerial data. Blackmore says, “Luck Stone collects aerial imagery to make high-resolution maps and 3D models of work sites to visualize what a site looks like currently and what it looks like in the future.” More accurate information helps to manage contractor costs, while maximizing profits for customers. This enables everyone at Luck Stone to use the latest, most accurate data in their decision-making.

In addition, UAVs have collected information about truck routes, distances and gradients. This is used to optimize the fleet of haul vehicles. In two recent cases, drone-assisted volumetrics were used to calculate how much earth (dirt) had been shifted by transport contractors. For example, using the data, Luck Stone calculated that there was still approximately $60,000 of value left at each site. So while Luck Stone extracts more value from their sites, drone data enables the company to uncover new insights in the planning stages which can also reduce costs. Such data can be harnessed so that it is consumable, actionable and shareable.

By all accounts, Delair’s aerial intelligence platform is an essential component to managing its sites – from managing their transportation fleet to calculating the value of a new site.

Drone data has removed the guesswork from planning new projects. Detailed maps and contour surveys are combined with geological data to project scenarios and test out designs. Aerial imaging analysis enables Luck Stone to capture and analyze more granular site detail than a ground-based survey team. The up-to-date, high resolution, geo-localized sky images can be transformed into actionable aerial data. At the same time, it has freed up Luck Stone’s team to focus more on what they do best. For example, in a recent project, Luck Stone project designers used aerial intelligence from UAVs to choose the route of a road to a new site. The optimized route protected 1 million tons of aggregate reserves, ready to be extracted at a later date.

“It’s hard to even put a cap on what’s going to happen with drone technology and the people who are tapping into this.”  Eric Warinner, Luck Stone Drone Pilot

So what about the future? Companies are working toward a future where drones are used on every jobsite. Luck Stone continues to be a leader in technology, sustainability, and efficiency. For the company, integrating drones into business operations is no longer something on a high-tech wish list ─ it is a business imperative.

Drone technology has impacted the way Luck Stone operates by delivering costs savings, improving safety, and increasing efficiency, more accurate maps, and 3D models. In the days ahead, as hardware and software continue to improve, drones will continue to be even more indispensable. As Luck Stone keeps growing its business, UAVs data analysis powered by Delair’s Aerial Intelligence platform will continue to prove its value to its business.

Would you like to know more about delair.ai for Mines & Aggregates? Watch a demo